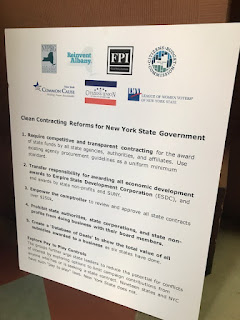 This week the League, ReInvent Albany, NYPIRG, Citizens Union, Fiscal Policy Institute, and the Citizens Budget Commission held a press conference in Albany pushing for reforms to our state contracting system. Last year there were several state and federal indictments related to a major state contract bid rigging scandal that cost tax payers an estimates $800 million. This scandal arose after oversight authority of state contracts was taken from the State Comptroller. Our organizations are supporting legislation that will increase transparency and government accountability when contracts are awarded. We are supporting the following 5 reforms:

The Senate has already passed legislation enacting these reforms. The League and our good government partners will be lobbying this legislation in the Assembly over the coming weeks. We hope to see this bill passed in the Assembly and signed into law before session ends.

Posted by League of Women Voters at 3:53 PM No comments: 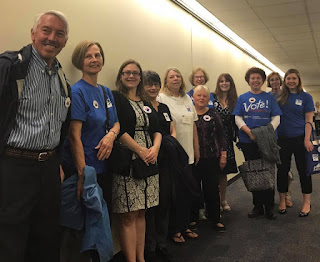 This week we made a big push to get early voting moved in the Senate. We gathered together nearly 20 of our members to attend the Senate Elections Committee meeting to let the Senate know we mean business! Several bills were killed during this committee meeting including the Voter Empowerment Act and a bill to force all Presidential candidates to disclose their tax returns. All three of these bills were petitioned by their sponsors to be heard by the committee. Lucky for us, the early voting bill survived and was moved to the Local Government Committee.

The Senate Republican committee members voted "without recommendation" meaning they would allow the bill to pass but if it came to the floor for a vote they may vote against it. Only Senator Marchione was a solid "no" vote. Unfortunately for us, she is also the chair of the Local Government Committee. Our members worked quickly to put in calls to her office asking her to put the bill on the agenda. 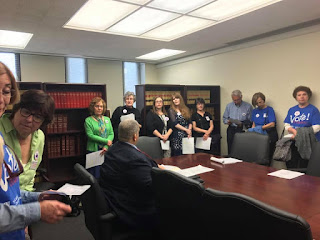 We were so pleased on Friday when we saw that she had moved the bill to Senate Rules. Although we would have preferred the bill to move to the floor we were happy that they bill wasn't killed in committee. We are now focusing our attentions on getting this bill taken up in Rules. The bill's sponsor, Andrea Stewart-Cousin, is also the ranking member on Rules. Our hope is that she will use her power and influence to get a vote on this bill!

On Tuesday we kept the momentum going and worked with the NYC Campaign Finance Board on their call to remove barriers to elections. We joined them for a morning rally that was packed with high school students and our NYC League members. Senators Stewart Cousins and Gianaris also attended as well as Assembly Members Carol and Kavanagh. You can read the release about their VoteBetterNY project here. Many thanks to VoteBetterNY for including us in their event! We really do all need to be working together on these reforms.

On the national level, we are becoming increasingly concerned with what could potentially happen to the health care of millions of Americans. Our National organization released the statement below on the new health care plan. 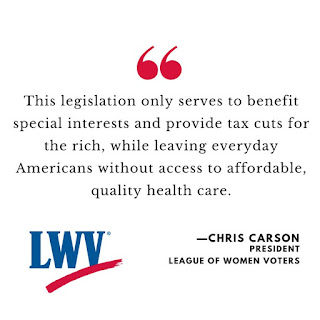 Posted by League of Women Voters at 3:59 PM No comments:

We started off the second half of the legislative session with a bang and a shout! On Tuesday we held our annual lobby day and had fantastic attendance from our Local League members. This year we had members from as far west as Chautauqua county, as far north as Plattsburgh, and as far south as New York City. We kicked off our lobby day with a huge press conference outside of the Senate chamber demanding that the legislature pass voting reforms before session ends. Our members were joined by Senate Democratic Leader, Senator Andrea Stewart-Cousins, Senator Gianaris, Senator Squadron, Assemblyman Kavanagh, Assemblyman Carroll, and Assemblywoman Fahy. All of these legislators are strong supporters of voting reforms and sponsors of legislation that would make voting easier and more accessible. The press conference was aimed at drawing attention to these issues and the fact that the Assembly Election Law committee would be voting on an early voting bill the very next day. You can watch the full press conference here. 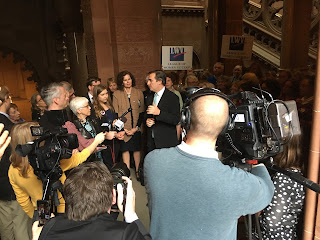 After the press conference our members headed out to lobby their state legislators on these reforms as well as the Reproductive Health Act, the Comprehensive Contraceptive Coverage Act, the New York Health Act, a Constitutional Amendment to make clean air and water a first amendment right, and reforms to the delegate selection for a Constitutional Convention.  A special thank you to all the legislators who made time to meet with our members, although they may not always agree with our positions we appreciate the time they take out of their busy days to sit down with our members. 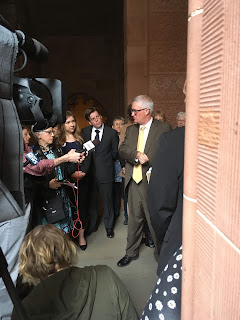 On Wednesday the Early voting bill was moved out of the Assembly Election Law committee. The bill was reported and we expect that it will be moved to the calendar soon. We are hoping to see more voting legislation pass through committee in the coming weeks. Last session the Assembly passed several progressive voting reforms including this early voting bill, a Constitutional Amendment for no-excuse absentee voting, a bill to allow for electronic poll books, and a bill to make ballots easier to read. Unfortunately the Senate did not address any of these bills.  This year we will really be pressing the Senate and demanding that they take up voting reform legislation. 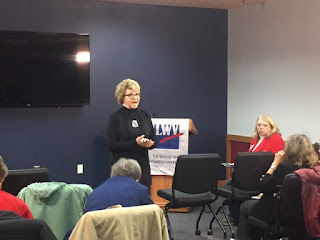 Wednesday evening the League participated in a panel on the Constitutional Convention held at Onondaga Community College. The panel was co-sponsored by the Rockefeller Institute and NY Bar Association. There was quite a good turn out and the audience asked some great questions at the conclusion of the presentations. This is the 7th public forum the NYS League has participated in and the 35th that the League as a whole has done. We will continue to do public education as we get closer to the November election. To see our Executive Director, Laura Ladd-Bierman, speaking about delegate selection and process see our video here.
Posted by League of Women Voters at 3:38 PM No comments:

Be Earthwise - Create a Healthier Planet: Here's How!

Although there was no legislative session this week, the League office was busy planning the roll out of our Be Earthwise campaign for 2017.

In the first phase of this program we asked citizens to pledge to vote with their dollars and their actions and respect the environment through their daily decisions. You can learn more about the pledge by clicking here or by watching our brief PSA.

Now we are asking citizens to work even harder to help preserve our planet by being meat free, being chemical free, and reducing, reusing, and recycling. 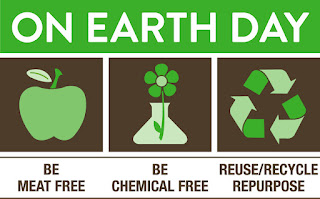 These three initiatives will not only lead to a healthier planet but can also help improve your own health. To learn more about the initiatives click here.

Take the pledge to Be Earthwise today!
Posted by League of Women Voters at 12:06 PM No comments: